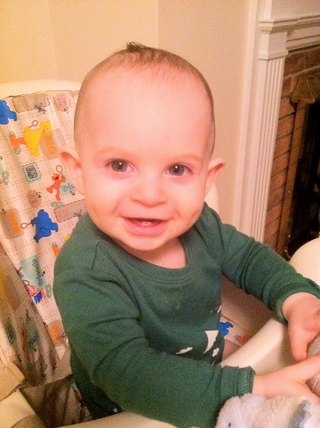 I think Finn can wait a few years to see TAKE SHELTER. I'd rather just shelter him.
My nephew and former producing partner, Tyler Davidson, recently screened his film, TAKE SHELTER, in Cleveland. It's gotten praise and awards from all over the world, but of course I wanted to see it for myself.

I was completely stunned and moved by this great film. I could write a long review of it, but I'll make this short. If I were to blurb it this is what I'd say:

TAKE SHELTER combines a literary, lyrical, sensitive character-driven drama with a psychological thriller. The over-arching effect of it is that these shocking, scary and even apocalyptic images and scenes bring out tenderness and love for family. That is one astonishing accomplishment in today's cinema. The performances were excellent, but Michael Shannon's role as Curtis is simply one of the finest performances by an actor I've ever seen on film. Like Jimmy Stewart and Marlon Brando at their best, there is no one to compare him to in his day. He's that good, and should win an Oscar for his epic performance.  Read More

Tags: Jay R. Ferguson, Mad Men, The Year That Trembled, tyler davidson, January Jones
For those of you who are fans of the TV show, MAD MEN, as Lydia and I are, you met a new character tonight, Stan Rizzo, the fictional firm's new art director. He as played by Jay R. Ferguson.

We cast Jay in the role of Isaac Hoskins in the movie version of my novel, THE YEAR THAT TREMBLED, nine years ago. The story of his casting is that the director/screenwriter, Jay Craven, my producing partner, Tyler Davidson and I saw his video tape audition. Within what couldn't have been more than ten seconds, we all said, "he's got it." And that was it - we cast him, and never did he disappoint. A real pro's pro and passionate about his work. What a pleasure to work with, too.

Jay's that good, and was that perfect for the role and he didn't disappoint. Jay, a true gentleman and good soul, knows how to tap his actorly center - similar to a writerly center - and bring out complex characters, including a rouge FBI agent in TREMBLED, and tonight, in a sterling (pardon the pun, Roger) debut, as an arrogant, brilliant, chauvinistic and ultimately insecure art director who is on the cusp of the free-love and liberation movement in America. What a great actor, and what perfect role for Jay. Congratulations to Jay - one of the good guys in show business - and congratulations to MAD MEN, one of the best shows ever on television, on their awards. It's nice to see excellent writing and acting rewarded.  Read More