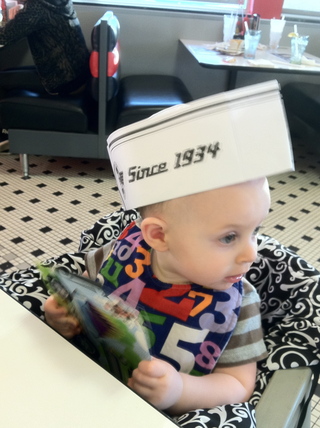 At the Diner
Here's our little man Finn at the diner. His hat says, "Since 1934," so I checked to see what was happening in literature that year. What a heyday it was: New books by Samuel Beckett, Edgar Rice Burroughs, Agatha Christie, F. Scott Fitgerald (TENDER IS THE NIGHT), Henry Miller (TROPIC OF CANCER), Ellery Queen, P.L. Travers, Evelyn Waugh, Nathaniel West, H.G. Wells, Frederico Garcia Lorca....

To name a few. Inspiring, yes; and a little sad. The country was awash in literary genius, in new ideas, and all of this during the Great Depression. Can you imagine?

What's happened? Where is the great literary art and the great literary writers? We have some, but I mean, that partial list...it's tough to dispute that 1934 boasted more greats than today. (Even genre writers: James Patterson instead of Agatha Christie?)

Some possible answers: Lost in a fog of distractions, both electronic and otherwise; writing for television; writing for advertising agencies; the pace of life; MFA factories; deciding not to write at all because it's usually not valued like it used to be.

Literature, and books in general, despite the availability of tablets, Kindles and such, is suffering. Too many other things to do with one's eyes than read a book. So what can we do we as lovers of literature? All I can think of is read more and better literature. And if you're a writer, set your bar higher, whether you write genre, literary or whatever it may be. That's what I'm doing. That's about all I can do.  Read More