Fictionalizing a Small Town: An Act of Liberation 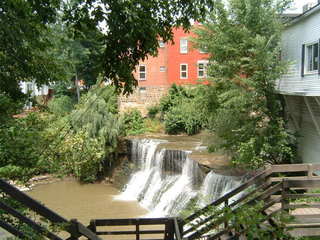 The Real Chagrin Falls
My first novel, The Year That Trembled, which was recently released by Gray & Co. Publishers in its second edition, and my new novel, Vengeance Follows, which is also being published by Gray in early December, are both set all or partly in a fictional small town in Ohio called Chestnut Falls.

There are a few reasons, really, but here’s the main one: my novels aren’t set in Chagrin Falls…they’re set in Chestnut Falls.

There's a tradition of novelists fictionalizing small towns, with the most prominent examples being Mark Twain, who fictionalized his hometown of Hannibal, MO, calling it “St. Petersburg.” Next in line might be F. Scott Fitzgerald, who fictionalized Great Neck and Manhasset Neck, Long Island, and turned them into East Egg and West Egg on Long Island.

In the case of my novels the closer parallel might be to Fitzgerald’s, only because he uses fictional small towns set against the real city of New York City, specifically, the borough of Manhattan. I created Chestnut Falls and set it close to the real city of Cleveland, Ohio.

Cleveland, like New York, is a big place – not as big as NYC, of course, but Greater Cleveland has more than two million people. That’s a good place for a novelist to get lost in. Chagrin Falls, on the other hand, has just over four thousand people.

Like any novelist, I need to have complete freedom in creating characters. And I think it would be too distracting for readers to try to figure out who’s who in a real small town, especially if “who” is made up. The wonder of the novels is that the moment you read “a novel” on the cover of a book that means it’s made up. That's a profound thing: it allows the author freedom.

I also need that freedom to change the landscape, the direction of the streets, the names of things, whatever the case may be. I changed street names, locations of landmarks, and lots of other elements of Chagrin Falls, and in so doing, it became not Chagrin Falls, the real place, but Chestnut Falls, the novel’s place.

On the other hand, I kept a few interesting elements of Chagrin Falls. But I also added and changed things. In Vengeance Follows, for example, there’s an old telephone booth at one of the corners of the village park called Triangle Park. In the real Chagrin Falls, there’s no telephone booth in a park called Triangle Park. But I wanted one in my novel, so I put one in.

Another example. In Vengeance Follows, my protagonist, Sam Koppang, rents a small office on Main Street in Chestnut Falls, over a hardware store, in a former Masonic Lodge, overlooking the Town Hall. From there he can see the goings on that are important to the plot.

In real life, I rented a small office on Main Street in Chagrin Falls, over a hardware store, in a former Masonic Lodge, overlooking the Town Hall.

But I’m not Sam Koppang. He’s a person (or character) I wrote in the novel. So the real answer, if there is one, is that a novel is a parallel universe. If you’re an aspiring novelist, please know this: It’s your story. It’s your town. They are your characters. Do what you want with your place, with the time, with your characters.

In an increasingly intrusive world, writing a novel is an act of liberation.  Read More
Be the first to comment

Writing Through Others' Eyes in Times of War and Peace

Among other things, I told the students that I had a wide range of people that told me they liked the book and/or movie. Many were Vietnam veterans. Even though the book is written from the perspective of an anti-war narrator, Casey Pedersen, who had much concern, respect and sympathy for the service men and women that were involved in Vietnam. Others that have liked the book and movie (and play) had been anti-war protestors. And many were in between.

I spoke of the evening we screened the movie at Hiram College in 2002. A veteran of Rolling Thunder, a motorcycle group comprised of Vietnam vets, and Dean Kahler, who was shot and wounded -- and remains in a wheel chair -- at the Kent State killings of May 4, 2010. They shook hands and received each other warmly.

I had cousins that went to Vietnam, and friends. To those alive and dead I give my utmost respect. First because they fought for their country. Second because, as I told the young people, to participate in an unpopular war takes a special courage.

When I write about soldiers, or those left behind, widowed or otherwise bereaved, or other innocent victims of war, such as civilians, as a write I must put myself in their skin and see through their eyes. Very few people in this life consider themselves wrong, or evil. Nearly everyone does what he or she thinks is right, If we have leaders that betray our interests sometimes, be they the angle-shooters at B.P. or Halliburton, or Presidents Johnson or Nixon, it's the common people who suffer.

I think that novelists and story writers should side with the common people, however uncommonly brilliant or troubled they are. I am a common man; I don't write for the CEO of BP (or any company), or for political leaders (of any nation). I write for my tribe - those who must live with the decisions the leaders make; decisions sometimes based on greed and ambition.