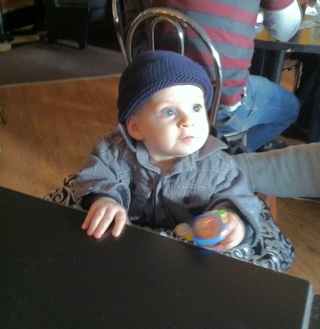 Sooner or later, everybody goes to Rick's
People learn most of what they know in the first few years of life. Part of the reason for that is that babies watch everything; but they also listen. They soak it all in; it forms much of how they think about the world and how they approach their lives. Hence language; hence logic; hence sensibility; hence writing.

As writers, we need to listen: not just to what's being said, but to the cadences of speech; to the inflections of stress or excitement or satisfaction; to ambient sounds and to beautiful sounds and to harsh sounds.

One of the problems writers have with fiction is when all or most of the characters sound the same. No one sounds the same... not really. Babies pick up on inflections and attitudes before they understand language. So should writers. Those underlying aspects of speech are referred to as subtext: that which is going on underneath the text, or in this case, speech.

Aww its lil' Finnie. I love this pic!