Autumn in the Falls 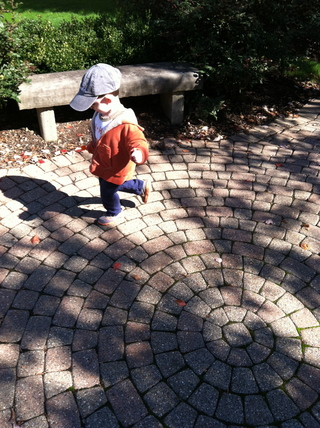 Finn in slanted sunlight in brief autumn
A beautiful Sunday afternoon. I took Finn down to the village. Ice cream overlooking the cold clear water at the base of the falls, at the Popcorn Shop, then I bought him a little pumpkin at the Farmer's Market, then he ran on the paving stones in the park, and we covered the waterfront and the town and overall we had what my late father would have called, "a blast."  Read More

Sunday in the Park With Finn 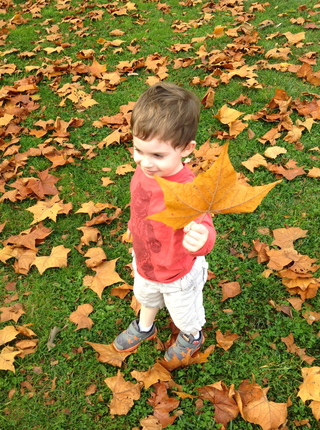 Holding a treasure
While Lydia and Angus went to the gym to work out, Finn and I went to meet a friend from work and his wife. We had some time beforehand, so we did the full autumn Sunday circuit: the park, where Finn ran through the leaves with the absolute, pure, new-to-his senses wonderment of a two 1/2 year old; then walked to the Farmer's Market, where he got the apple that he wanted so much (and a few other fresh items); a tour around the bandstand in town, as he and a new little friend ran "round and round and round" until they were dizzy; then we met my friends; then Finn and I ended up at the library, another of his favorite places. Finally home. Then I went to the gym to work out, in my determined effort to get back in shape after a brutal few years with a bad injury, one that had worsened as I aged, and finally peaked, so to speak, with major surgery in February 2013. I don't expect to be running marathons, but am moving a lot faster and next comes the getting in shape part, and I do expect to be running like a madman after Finn, because he is fast. Very fast.

Then, after the gym, home to Lydia's dinner with fresh food from the market.

I do love autumn. It's my season. I wonder if it's Finn's. He loved the snow last winter; and enjoyed his spring and summer. But I wonder if he perks up as I do as the leaves fall. Seeing Finn really experience it for the first time, at least the first time he can give language to it, makes it that much better. The other day we were driving and he said, "Oh, no, Daddy! The leaves are falling off the trees!" He was momentarily sad and concerned for the leaves. (He's sensitive, that's for sure.) I explained the seasons in terms of nature, the cycles and the symbols (Frosty the Snowman is up next), and he took it in, and was happy again. Thus, today, and this treasure he holds up.  Read More
Be the first to comment