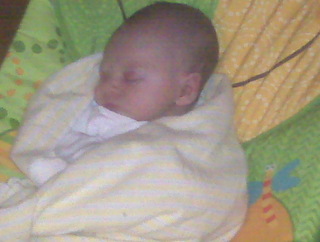 Finn enjoying his first week birthday in his own way
Today is the first week anniversary of our son's birth. This isn't a food blog (to be sure) but we had soup and good bread, though Finn had his own menu. Finn did join us for dinner. This is him in his little chair - it was his first meal around the dinning room table. (And ours in a while.)

I think he was very comfortable, even if he doesn't quite reach the table yet.

Which brings me to Cicero on first efforts in writing: "The beginnings of all things are small."

If you're writing a novel or anything else and feel intimidated, write one sentence. That's what I did - I wrote the last sentence. Then I wrote the first, on the advice of a friend, and I considered my novel nearly finished. I simply took a few years to fill it in.

As for Finn, he's seemed to enjoy the family meal in his own drowsy way.  Read More