Why You Might Consider Writing by Hand (now and then) 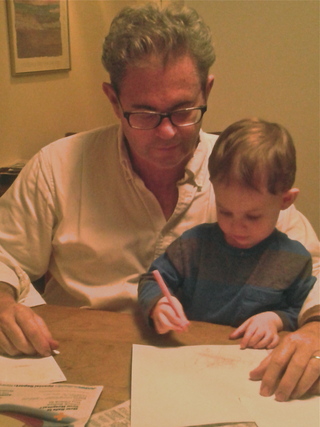 My son, Finn, loves to write. His loops and lines are wonderful.
I can’t imagine my life without some measure of writing by hand. While I use my laptop and smart phone nearly everyday for professional and writing purposes – emails, Internet research for stories, fiction, nonfiction, corporate communications and blogging – there are things that a computer will never be able to do that writing by hand accomplishes, at least for me.

I write with pen and ink on paper daily in a journal: for To Do lists, note-taking, for ideas and prose; and with a pencil in a calendar. (An eraser works well as a delete button.) Here are three reasons I think writing by hand is important for those who can do it.

The first is that it connects me directly to the paper, to an ancient medium that’s been used for about 5,000 years. (Does that make writing by hand part of what it means to be human? My archeologist and sociologist friends might be able to answer that.) There’s no uniform font, no spell-check, no automatic formatting. I’m more careful when I write by hand, both with what I write and how I write it – and by that I mean how I physically write it, how it looks, what message it sends. If the words are hurried and messy, and actually look tired, stressed or rushed, that’s pretty much an indicator of my state of mind at the time of writing. If my words are reasonably neat and legible, it tends to mean my thinking and physical state was calmer. A page in a journal becomes a time capsule of my physical and emotional state, as well as of the meaning of the words. (For more on this, you can study handwriting analysis – or graphology – a tool used by many organizations and individuals.)

The second reason is that I tend to remember certain things better when I write them by hand. Notes, dates in a calendar, spur-of-the-moment journal entries: these writings become more of a part of me than if I type them and file them in the on my computer and in the cloud – which is, after all, not a cloud at all, but a series of gigantic servers that someone else controls. There’s something gratifying and secure about knowing that only I see the notebook or calendar I’m using, unless I share it with someone.

The occasions when I’ve used a computer calendar are about the only times I’ve forgotten what day it is. When I use a paper calendar, I tend to see the whole picture, and to remember a given day or week, as well as my appointments. Most importantly, I feel more directly connected.

The third is the human connection of writing by hand and sharing it. There is nothing like sending or getting a hand-written card or letter. The implicit thought and care and time and effort that goes into a letter or card written by hand often says a more than the words themselves. Writing by hand gives you a chance to think about what you want to say; conversely, it may tell you something about how the writer feels about you. Emails, as most of us know, can be the products of short-term rage, or desire, or other extreme emotions…and are all sent at the speed of light. Once they’re sent, they’re sent. Ask General Petraeus. (He would probably admit his bad judgment in such cases.) Or Donald Trump. (He would not, but that’s Donald.)

If you’ve written by hand lately – or even if you haven’t, try it – see if you can compare it to the cursive you wrote when you were in school. If it’s deteriorated – and for modern people, that’s often the case – don’t despair. It’s a skill you can usually get back, like riding a bike or getting off the couch to change a channel on the TV. And like getting off the couch, it takes a little bit more effort. But it’s worth it, at least for me. Try it and see for yourself.  Read More