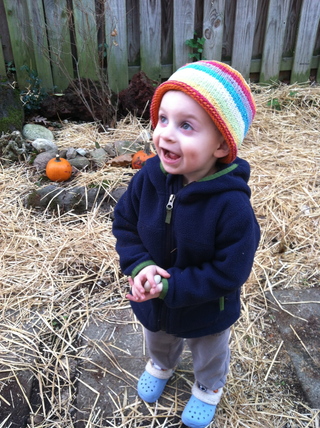 What could Finn be looking at? What else; who else? His mommy.
I'll be posting soon about my upcoming writing class in the Chagrin Valley -- in the heart of the Village of Chagrin Falls. It's a new venue for me, but I'm back to teaching part-time after a respite of two-and-a half-years. The class begins in January.

The reason I took this break is pictured to the side of this post. Finn Scott. And the look on his face is what I hope to teach my students: how to look at the world with wonder, with awe, with innocence...and then write about it in a new way, taking into account all the baggage they have gathered along the way. Those two things seem opposite, don't they?

With Finn, so much is new. I look at the world through his eyes. Through my own, too, and therein lies the conflict and paradox of a writer's journey. How do you meld the two visions together. F. Scott Fitzgerald said, "The test of a first-rate intelligence is the ability to hold two opposed ideas in the mind at the same time and still retain the ability to function."

This is true of any good writing. This is what I will try to teach my students. This is what any decent writer must, should struggle with.  Read More

Last Class I'll be Teaching for at Least a Year

Tags: The Chagrin Valley Writers' Workshop, Teaching, Northeast Ohio, Cleveland, writing classes
It seems that this blog gets quite a few more hits than the other pages on my site, so if you're interested in taking the last workshop class I'll be teaching for at least a year, please hit the Educational Services link, above. After this workshop I will sometimes be available for manuscript consultations.