Finn Discovers more of his village, and a setting for my new novel 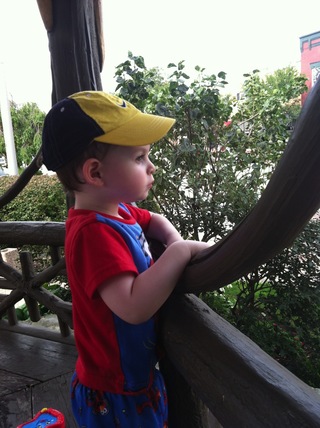 Finn gets his first look at Chagrin Falls from the bandstand in the Village Triangle.
I've been working on a new novel, FRAGILITY, for quite some time. It's currently with my agent. I've done a few readings from it, but I'm not much of a YouTuber in regard to literature, so here's an excerpt instead.

The novel is about an ex-patriot wine writer, originally from Chicago, who has lived, married, and mourned his wife's passing in France. In this short section, he's just come to the States... to Chestnut Falls, to be exact. Anyone who read my first novel, THE YEAR THAT TREMBLED, would know Chestnut Falls. It's a small village in Northeast Ohio. Any similarity to Chagrin Falls is coincidental, of course. For example, there's no old phone booth on the Village Triangle.

The photo I took today is of our son, Finn, who will be 20 months old in 9 days. I took him to the real Village Triangle in Chagrin Falls, where he was overjoyed and fascinated with the views from the bandstand and the green-space, walkways, and with the trees, plantings and benches.

So here's the excerpt from FRAGILITY, at the end of Chapter 9:

"Sergeant Michael Shield turned left on Grove Hill and drove down into the village. Sam watched his taillights blend in with the town. He lit another cigarette, exhaled, and studied the view. He saw the lighted church spire just east of Main Street and the Greek Revival Town Hall on the west side of Main. He had a clear view of Village Triangle Park at the center of town. He made out its bandstand, first built in 1877, and around it its brick walkways, plantings and benches. He made out an old-fashioned telephone booth at
the top of the triangle. He wondered if it worked, if anyone used phone booths in America anymore, or if it was a novelty. He saw a tall pine tree covered in multi-colored lights at the southeast corner of the Triangle. He saw shoppers walking in and out of stores and the bars and restaurants at the bottom of the hill. He heard faint music on a PA system. Nat Cole sang The Christmas Song.

"Sam’s stomach tightened. He could not bear to hear the song, but he listened anyway. He’d loved to sing to Sophie when she was alive. Now it was time to listen to what he had not been able to hear and see what he could not bear to see. Here he had the time and space to confront her past, to try to understand the elements that went into her demise.

His words were a cloud of smoke and frost. He threw his cigarette down and stamped it out. He took his suitcase from the car, turned and walked toward the front door of the rental house.  Read More

Tags: new novel, second draft finished, new writing classes
I finished the second draft of my new novel today. Tomorrow I send it off to my agent. Within a few days I'll post information about two new classes I'll be teaching.