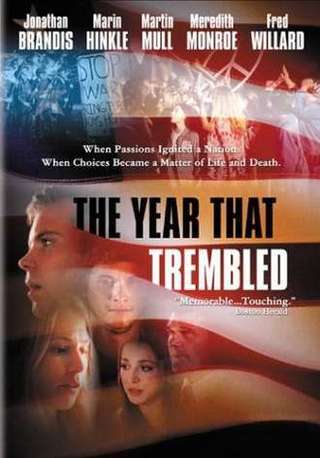 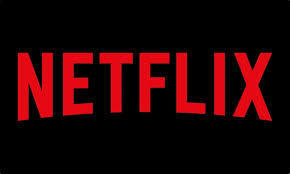 Click to Rent the DVD version of The Year That Trembled

From Jay Craven, Director & Screenwriter for The Year That Trembled. Mr. Craven is co-founder of Kingdom County Productions, and a renowned filmmaker and film professor at Sarah Lawrence College.

"Scott is a visionary who knows how to make things happen. I directed the film based on his book The Year That Trembled and I consulted with him on all aspects of its production. I have never met anyone who was more thoughtful, gracious, flexible, supportive, and capable in his capacity as a team leader. Everyone appreciated Scott's grace and equanimity on the film shoot--and before. He handed film crew and actors with the same kindness and concern--as he did the film's investors. The movie business is not for the faint of heart. Scott stood his ground, dealt with numerous thorny challenges, and kept his eye on the ball. I can't imagine a better person, with whom you'd want to be in the trenches." 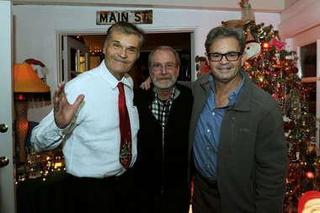 THE YEAR THAT TREMBLED

Written and Directed by Jay Craven

"Touching and intelligent. It deserves to be seen."
--Ain't It Cool News

"...Shines an honest light on a time and place that still resonates in the American soul."
--Jeff Craig, Sixty Second Preview

"Lush cinematography and stellar performances... perfectly capture the zeitgeist of this troubled time. The experienced cast makes the most of the film's subtleties and dramatic high points. Brandis and Hinkle are especially fine in portraying their dangerous attraction."
--Julie Washington, Cleveland Plain Dealer

"Captivating and timely. Brilliantly captured the events surrounding the Kent State demonstrations in 1970 and the end of innocence that the campus shootings wrought."
--Roger Jackson, ifilm.com

"I was very touched. The film captures the essence of what people were going through at the time--not just the movement, but the regular guys. I highly recommend it to anyone."
--Sherry Beall, KPFK FM, Los Angeles

"At a moment when history is rewinding itself for more military adventures in countries and cultures we do not understand…a film I hope Americans will see."
--Peter Davis, Academy Award-winning director, Hearts and Minds

"...Brandis and Hinkle inhabit their roles with real weight; there's a nice reunion of Martin Mull and Fred Willard as beleaguered Ohio parents, and a spacey turn from Henry Gibson... Craven pays meticulous attention to the details of the Kent State shootings and aftermath, and deftly integrates period news."
--Jon Strickland, LA Weekly

"The Year That Trembled evokes the fear, anger, and conflict that swept over the country at that time."
--Kevin Thomas, Los Angeles Times

"Films that effectively capture the mood of the 60's are few and far between. Writer-director Jay Craven's The Year That Trembled succeeds... good work from Henry Gibson, Fred Willard, Martin Mull (all playing it straight), and the latest actress from the Chaplin clan, Kiera."
--Andy Klein, Variety

"The overall feeling of the period is just right, and the performances are highly affecting, with old hands like Henry Gibson, Fred Willard, and Martin Mull interacting with younger players as deftly as the fictional story does with the archival footage. This is more believable than most depictions of the period because the politics are informed by historical reflection."
--Jonathan Rosenbaum, Chicago Reader

"Memorable... beautifully reflects the depth of experience of the late 60's and early 70's... a touching glimpse into the lives of young people enmeshed in the political and emotional climate of the times."
--April Greene, Boston Herald

*** "Intimate, subtly riveting, and richly reminiscent. The Year That Trembled captures much of the drama and essence of the Vietnam War protest era."
--Marty Meltz, Portland Press Herald (Maine)

"At a moment when history is rewinding itself for more military adventures in countries and cultures we do not understand, The Year That Trembled is a film I hope Americans will see."

"The film's themes resonate in a timeless way but, because of our current war, are especially relevant."
--Lindsay Utz, Arizona Daily Wildcat

**** "Tremendous film... The Year That Trembled is a powerful story of ordinary people caught up in extraordinary circumstances. Don't miss it."
--Rob Williams, The Valley Reporter (VT)

"***1/2 An elegiac, well-acted ensemble drama based on the poetic 1998 novel by local writer Scott Lax... like Robert Altman with an extra dose of gentle humanism... evokes the early-'70s time period splendidly, without capitulation to hippie camp, finger-pointing or Top 40 soundtrack hits... a heartfelt album of relationships, sweetness, innocence, irony and regret, all crystallized in a fragile time when the much-vaunted counterculture revolution flickered briefly for a final time, then winked out with a puzzled whimper... a well-honed, non-formulaic postcard dispatched from the sunset of the Age of Aquarius."
--Charles Cassady Jr., Cleveland Free Times

"The film is brilliant. It captures the time as if I were there once again. A deeply moving film experience."
--James R. Messenger, Emmy Award-winning and two-time Academy Award-nominated producer

"An Arizona Film Festival favorite. Director Jay Craven's coming-of-age drama is set on a college campus in 1970 during the Vietnam War. As students hear about the shootings at Kent State, their own protests escalate, the draft begins to claim some of them, and the complexities of the counterculture force them to make hard decisions."
--The Arizona Star (Tucson)

"The Year That Trembled deals with matters that Hollywood won't touch, and gets people thinking about a dramatic piece of our history that has been largely forgotten. What happened at Kent State was a microcosm of what happened to the nation. TYTT's young characters have their lives changed, and we get to know them up close--their loves, their fears, their dreams. This is an unusual film."
--Howard Zinn, author, The People's History of The United States

*** 1/2 "A surefire recipe for cultural whiplash: director Jay Craven takes us back to a time when people of college age had things on their minds slightly more pressing than wet T-shirt contests or neurotic roommates ? and faced choices on matters considerably more far-reaching than their cellular service plan. It's hard to believe the America of The Year That Trembled is the same one we live in today... Jay R. Ferguson turns in a chilling, edgy performance as a G-man in a baaad sheep's clothing."
--Rick Kisonak, Film Threat

"This is the kind of indie worth waiting for... A very good film may be made someday about the Kent State Massacre, but for Lax and Craven, Kent State is just the spark that lights the story's fuse... The performances are strong and passionate, all the way down the line. The film boasts a strong young cast... After what feels like months of formula movie garbage, The Year That Trembled feels like the first important movie of the year. Aside from John Sayles, no one has tried to do what Jay Craven has accomplished."
--Bryan VanCampen, Ithaca Times

"The Year That Trembled will reconnect a new generation with the way an American era once was lived, and the way great films once were made: with undeviating conviction, passion, and faith in dreams."
--Ron Powers, Pulitzer Prize-winning and Emmy-winning critic; co-author, Flags of Our Fathers and Mark Twain: A Life

"The Year That Trembled is a great film... an incredible independent film that looks and feels like a Hollywood studio production."
--Mara Evans, Director, Midwest Independent Filmmakers Conference

"Marin Hinkle gives a standout performance!... This is an important film and will hit home for many people. Go see this movie at all costs!"
--The Lakelander