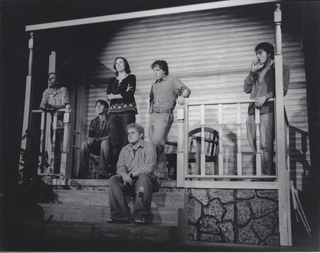 THE YEAR THAT TREMBLED

A Play in Two Acts

Adapted from his novel of the same name

The key to understanding Scott Lax's "The Year That Trembled" is given to the audience in the play's closing moments.

Mr. Lax has indeed kept Casey's promise to Helen delivering not only a book and a movie, but now a stage play based upon the novel, which premiered at University School on October 23rd.

"The Year That Trembled" is a classic coming-of-age story centered around the lives of four recent high-school graduates who share an old farmhouse in "Chestnut Falls" (which bears more than a striking resemblance to Chagrin Falls" in 1970. The four young men struggle to find love and meaning as the Vietnam War and the coming draft lottery loom ever-present in their lives.

Having read the book, I was curious to see how Mr. Lax would adapt the story to the stage, especially with a cast of prep school students. There's more than a healthy dose of sex, drugs and rock n' roll in the novel, which I feared might be a challenge to perform in the University School auditorium without a few pointed letters to the Headmaster.

Mr. Lax pulled it off gracefull by revealing amorous action through dialogue, but never displaying more than a longing look and a hopeful peck or two on stage. (Thank goodness, as I'm sure none of the students relished the prospect of a steamy love scene with mom and dad watching from the third row.

Director Carol Jaffee Pribble guided solid performaces from a strong cast of young people. Though most of the actors probably lacked dramatic experience, they never lacked for enthusiasm or sincerity in bringing their complex characters to life.

There were a number of standout performances, most notably Peter Moses as the sweet and searching good-guy Casey Pedersen. Also of note were the performances of Emerick Corsi as Jim "Hairball" Morton, the beer-swilling, obnoxious but kind-hearted clown of the house, and Sarah Ferguson as the hard edged, self-centered hippie Jennifer Treman.

Drew Waxman brought an endearing quality to his portrayal of Phil Rosenbaum and charmed the audience with his performance of "Little Girl Sad," a bittersweet little ditty that is also a running gag through the show.

The play, like the novel, is more focused on character development and conveying the tremulous atmosphere of the early 1970s than on the development of an intricate plot. However, this atmosphere is well-created, and the audience is swept into the juxtaposed haze of innocence, uncertainty, violence, hopefulness and confusion that characterized the Vietnam War era.

As the story progresses, there is increasing apprehension regarding the draft and also a growing tension surrounding a tangled love triangle (or maybe it's a rectangle) as Casey's feelings for his girlfriend, Jennifer, begin to fade and are replaced with a gnawing suspicion that he's falling for his best friend's wife, Helen.

I found Casey's conflicted and guilt-ridden love for Helen to be the most interesting and compelling element of the story, especially when it is further complicated by the birth of Helen and Charlie's baby, Sara, and by the news of Charlie's death in Vietnam several months later.

Peter Moses brought his character's angst to life vividly, quite believably conveying his powerful feelings for Helen and his enormous guilt for betraying his friend.

The conclusion of the play does not offer the audience profound answers to the problems of any of the characters. Instead of feeling cheated, however, this ending seems appropriate for a story about the Vietnam War era as ambiguity and confusion still surround the war and its legacy thirty-some years later.

Kudos to Scott Lax, Carol Jaffee Pribble and the talented cast of "The Year That Trembled" for an ambitious and successful world premier.